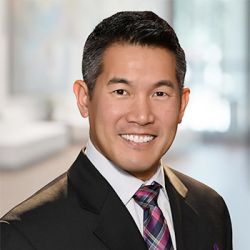 Joey is a patent attorney with extensive experience handling complex intellectual property matters for some of the largest companies in the United States, including Advanced Medical Optics, Broadcom, Charles Schwab, and Intel. With a background in electrical and computer engineering, Joey has handled a number of patent matters related to computer software and hardware (on behalf of both plaintiffs and defendants)–ranging from optical drives to wireless communication devices to e-business applications. Many of these matters were in the hotbeds of patent litigation, including the Eastern District of Texas, the Western District of Wisconsin, the District of Delaware, and the Southern, Central and Northern Districts of California. In one of his more notable representations, Joey jointly defended Charles Schwab, CyberTrader, and Terra Nova in an Eastern District of Texas patent infringement suit asserted against their Internet-based financial trading platforms. As a result of his team’s discovery of invalidating prior art and a demonstrated ability to prove invalidity to a jury, the case was dismissed with prejudice for a nuisance value settlement—a result described by the clients as “Lawyering at its best.”

Joey has gained particular expertise in maximizing the value of a company’s intellectual property. This not only includes monetizing a company’s patent portfolio (Joey led licensing efforts for a medical device client that resulted in patent cross-licenses and over $20 million in revenue) but also maximizing in-house opportunities for innovation (Joey has set up internal programs for clients designed to facilitate “out of the box” innovation and cross-functional collaboration between R&D and business groups).

Prior to joining One LLP, Joey was an associate with some of the top law firms in the world, including Latham & Watkins; Orrick, Herrington, & Sutcliffe; and Lyon & Lyon. Joey also has significant in-house experience as IP counsel for Advanced Medical Optics (now Abbott Medical Optics) in Orange County.

Before law school, Joey was an electrical/software engineer and product manager for an Orange County network software company where he developed network device drivers for PC-to-Host connectivity products.