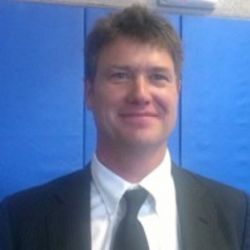 David started working at a bowling alley as the night mechanic with no training. From there he went through Motorcycle Mechanics institute to become a motorcycle, snowmobile and boat mechanic. He worked for 17 years turning wrenches.

In 2000 he got the opportunity to start as an alignment technician at WaveFront Sciences in Albuquerque. There he helped with the first prototypes of a Wavefront Aberrometer (called COAS) for measuring the eye. By trimming the instructions to the bare essentials, he was able to bring the production time down to days from weeks. All the while he went back to school and finished his college degree.

David was promoted to R&D Tech and started to work on other projects. There his skills in Mechanical Engineering were put to work. He made many prototypes from scratch for various projects such as a device for measuring a large mirror (later to be used on the James Webb telescope mirrors), a device to measure contact lens molds, (this later turned into products to measure contact lenses and IOL’s) and even a prototype COAS unit that could objectively measure accommodation. With this unit we measured one of Ace Visions first patients and objectively recorded 2 diopters of accommodation in a 58-year-old patient. This later became the DSA unit for measuring accommodation.

David became the Production Manager in charge of COAS. Once again the production process was sped up using this time lean manufacturing techniques so that the unit could be produced in hours rather than days.

David was later heavily involved in the design and production new measurement unit, the iDesign. This was a new HD aberrometer that has an included topographer. Again, the production time was 3 weeks at first. After tweaking the steps, the unit could be produced in less than 8 hours.

David was then promoted to operations manager in charge of all production. He traveled to California and trained the production and engineering staff from Abbott how to setup the production line and produce the unit. He also helped set up the service program and training. In 2012 David was hired by OD-OS as the US Service Manager to work on a Retina Laser called the Navilas. This unit uses eye tracking to keep the laser following a planned treatment. There he also revamped the production line and processes, built special tools and helped streamline the service department.

In 2015, OD-OS started designing a new Retina Laser. David was again heavily involved in making and designing prototypes. This time there was no machine shop, so he learned to use Solidworks to design the joystick, slide base, and several optical mounts.

All the special tools used to build and service the Navilas were designed built and tested by David. Using lean techniques, the production time was reduced from weeks to hours. He continued to work at OD-OS for almost 8 years doing Service and R&D work until hired by Ace Vision Group in 2020.