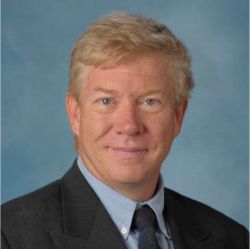 Dr. Neal is an engineer and scientist working in advanced sensing and metrology of the human eye and other complex optical systems. He is a serial entrepreneur, and founder/CEO of WaveFront Dynamics Inc.

After completing his doctorate degree at Stanford University in Aerospace Engineering and Applied Physics, Dr. Neal worked for 13 years at Sandia National Laboratories as the lead optical scientist in the Lasers, Optic and Remote Sensing department. During that time, he developed a number of lasers and sensors and was one of the early innovators of micro-optics technology. He realized that one of these applications – the wavefront sensor – had the potential for a number of government and commercial applications. (Wavefront sensors are devices used to measure the quality of optical systems.) In 1996, he and his business partner, Tim Turner, founded WaveFront Sciences, Inc..

At WaveFront Sciences, Dr. Neal led the research and development of new products and directed corporate technical development. He created several unique wavefront sensors to be used in specific applications, as well as general-purpose wavefront measuring devices. He was also the principal developer of the Complete Ophthalmic Analysis System (COAS). In addition, Dr. Neal has discovered a wide variety of applications for wavefront sensors, including measurement of aero-optic phenomena, large telescope mirrors, silicon wafer metrology, the human eye, intra-ocular and contact lenses.

Since the acquisition of WaveFront by Advanced Medical Optics in 2007, Dr. Neal led a technical team to develop a new combined aberrometer and topographer (iDesign). He continues to conduct scientific research, publishing clinical research in accommodation and instrument design while participating in various standards and conference organizations. He has more than 100 publications and holds 42 patents.

In October 2019 he founded WaveFront Dynamics to carry forward the work that he pioneered in measurement and treatment of the eye by expanding treatment modalities to treat more highly aberrated eyes.